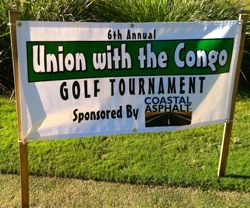 It’s about more than business.

It’s about doing the right thing.

Sometimes, that’s about giving back, and we at Coastal Asphalt are glad to give back and share.

We did just that at the recent sixth annual Union with the Congo Golf Tournament at Burning Ridge Golf Club.

The 2014 event raised $18,000 to help provide much-needed water for drinking, bathing, cooking, cleaning, medical care, waste disposal, and agriculture to a people who don’t have access to it.

Coastal Asphalt is a longtime supporter of the tournament, and this year we were proud to be a premier level sponsor of the fundraiser that has already paid for the building of seven water wells and eight latrines in the Katanga region of the Democratic Republic of the Congo.

“That’s huge,” said Sherry Winburn, our president and owner. “That is awesome to be a part of that. I am happy Coastal Asphalt can give back and help out and share with others because God has helped us in so many ways.”

It is estimated that up to 50,000 lives have been improved because of the water wells.

“I just can’t imagine not having clean water,” Sherry said. “It’s something we take for granted. We’re so used to having it.”

The golf tournament is put on annually by Union United Methodist Church, and we at Coastal Asphalt consider it a privilege and honor to be able to give back and do our part in making the world a healthier place.